Powering the future of transportation 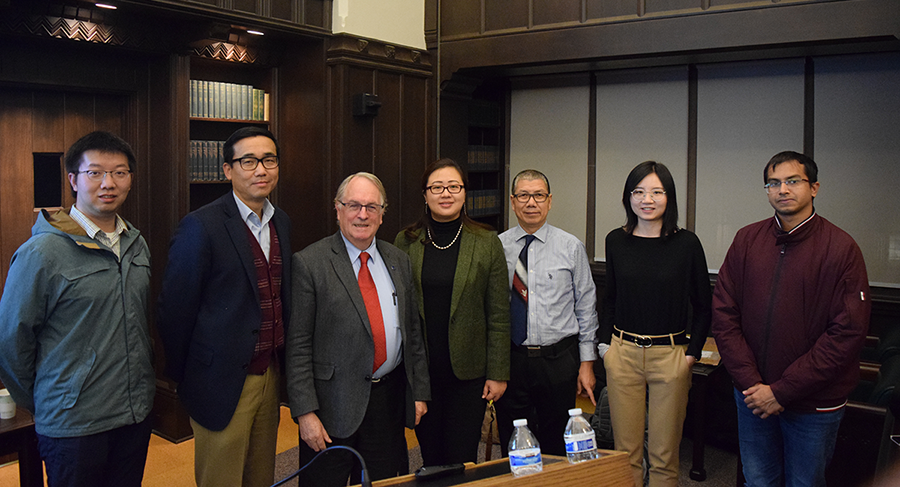 Every day, billions of people across the planet rely on lithium-ion batteries to power essential devices like cellphones, laptop computers, power tools, and pacemakers. The technology is one of the most influential inventions of our lifetimes, and its major innovators — John B. Goodenough, M. Stanley Whittingham, and Akira Yoshino — were recognized for their contributions to modern society with the 2019 Nobel Prize in Chemistry. But work is far from finished on the most pressing applications for these rechargeable batteries — electric vehicles. So, University of Washington (UW) researchers and Nobel laureates Goodenough and Whittingham are working together to build a better battery for electrified transportation.

With cars and trucks producing more than 25% of all greenhouse gas emissions in the United States, the U.S. Department of Energy (DOE) has made it a priority to support research that lowers the cost of electrifying vehicles. Advances in lithium battery technology could also lower the cost of grid-scale energy storage, which will be necessary to support the renewable grids of the future.

In 2016, the DOE formed Battery500, a national research consortium to build a smaller, lighter, and less expensive lithium-based battery for electric vehicles. Five universities, including UW, Binghamton University, and University of Texas-Austin (Whittingham and Goodenough’s home institutions, respectively), and four national laboratories are in the consortium led by the Pacific Northwest National Laboratory (PNNL). Battery500 aims to more than double the amount of energy that a lithium-based battery can store for its weight — up to 500 watt-hours per kilogram (Wh/kg). The $50 million, five-year project represents a major effort to leap forward from the Nobel-winning technology, and UW researchers in multiple departments are key members of the team alongside Goodenough and Whittingham. Jun Liu, a UW materials science & engineering (MSE) and chemical engineering professor and Battelle Fellow at PNNL, is the director of the program. MSE chair and professor Jihui Yang is a key principle investigator, and Daniel Schwartz, director of the Clean Energy Institute (CEI) and chemical engineering professor, is a member of the project’s executive committee. Many of the UW team members perform their research at the Washington Clean Energy Testbeds, an open-access facility for fabricating prototypes, testing devices and modules, and integrating systems operated by CEI.

“It’s been an honor to work with Stan [Whittingham] and John [Goodenough] over the past few years,” says Liu. “The lithium-ion battery is one of the most important inventions in modern history, and they have been key principle investigators on the Battery500 project.” When Whittingham gave a special guest lecture at UW this past fall, Liu noted, “Stan has been a great role model of scientific integrity and teamwork on Battery500, sharing his knowledge of the whole battery field. He is an extraordinary example for young scientists.”

“Stan Whittingham and John Goodenough inspire me to work smarter,” says Xiaoyu Jiang, an MSE postdoc in Yang’s lab and a recipient of a Battery500 Young Investigator Award. Jiang is developing new materials for the cathode, anode and separator components of lithium-ion batteries that will increase battery safety and lifetimes. “At our quarterly meetings, they have provided me with useful suggestions, and have made sure I am approaching my projects with a holistic understanding of the system.”

While members of the Yang lab are engineering new materials, a chemical engineering cohort co-advised by Schwartz and Venkat Subramanian, professor of mechanical engineering at the University of Texas-Austin, approaches the challenge of building a better battery from a mathematical perspective. Each of the chemical engineers uses models to understand the mechanisms of a battery in order to improve elements of its design.

Linnette Teo, a chemical engineering doctoral student and a CEI Graduate Fellow, is developing diagnostic tools that engineers can utilize both in the lab and in the field. “While I love studying batteries from a fundamental perspective, it can be easy to forget the importance of your research when you’re buried in those details,” she says. “But working with these established scientists on Battery500 and seeing the lithium-ion battery recognized with the Nobel prize reminds me of how groundbreaking our work can be.”

Akshay Subramaniam, also a chemical engineering doctoral student and CEI Graduate Fellow, is modeling the effects of pressure within a battery after working to optimize the physical structure of the cathodes for faster charge and discharge. He adds, “We’re standing on the shoulders of Goodenough, Whittingham, and Yoshino to build the future of transportation and energy storage, piece by piece.”

The Battery500 consortium has made significant progress towards the program goals, creating 350 Wh/kg batteries that can be cycled over 200 times while maintaining acceptable levels of charge. Researchers will collaborate with outside scientists and members of industry in their push towards the goal of developing a 500 Wh/kg battery that can be charged and discharged over 1,000 times.